What is helmet homologation, in short, it is a ‘very specific motorsport safety standard’ that is issued by either the Fédération Internationale de l'Automobile (FIA) or Snell Memorial Foundation (Snell) for racing, rallying and karting. A motorsport helmet needs to meet either, or both, of these regulations to become ‘homologated' and therefore cleared for use a particular motorsport event.

FIA standards are more prevalent in Europe and in fact most countries outside the USA where the Snell standard is adopted. If you are going to be racing in the USA you will need to take note of the helmet’s Snell rating, this is even the case if you have a helmet with a higher FIA safety standard, it is ONLY the Snell rating that is recognised

It is important to check with the organisers of your chosen championship, or the relevant race or rally series’ you are competing in as to what specific standard is required for helmets. It’s also important to keep in mind the plausibility of moving on, and competing in another race series in the future; ultimately requiring a higher standard. In which case, it would be a better idea to opt for the higher standard rather than having to buy twice, but you must also recognise that a higher standard will also protect you far better in an accident

Safety is not an issue to take lightly, even though it’s not as exciting as milled steel and carbon fibre parts, but if you want the very best protection use the highest standard, in the lightest construction available and the only other consideration is your financial restraints.

This article is designed as an overview of what is a very complicated subject. We always recommend you check with your race organiser or local governing body to establish the exact requirements for the sport your are partaking in. Please see the FIA and Snell websites for more in-depth information on homologation standards.

Homologation Definition: (Greek homologeo, ὁμολογέω, "to agree") homologation is the granting of approval by an official authority, be it a court of law, a government department, or an academic or professional body, any of which would normally work from a set of strict rules or standards to determine whether such approval should be given. The word is considered roughly synonymous with accreditation. Certification is another possible synonym 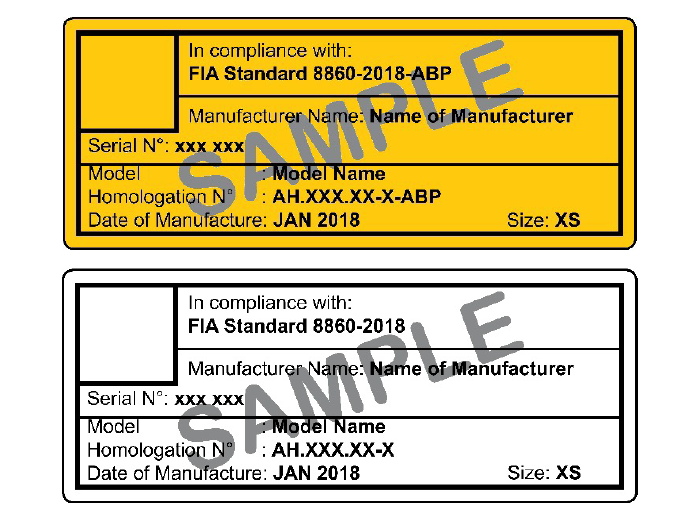 The FIA in their earlier years used known standards from around the globe for their helmet homologations, British Standards was very popular but is now outlawed, but Snell homologations have lasted the test of time, but now more than ever the FIA are issuing their own standard that soon enough will be the only recognised standard in Europe.

The FIA started with their F1 Standard FIA 8860-2004 alongside Snell SA2005, then in 2010 it was followed by their minimum standard FIA8858-2010 and 8860-2010, which included changes to the mounting of HANS posts, strengthened around this area but also have an alloy fixation point built into the shell. These homologations are still eligible today but there is now a higher minimum standard and two improvements on the 8860 F1 standard.

Passing these tests are not easy, and in setting their helmet test requirements all manufacturers must present their helmets to specific test houses to pass the required level which in some case is not an easy task. It is because of the standards set by the FIA which will make them the only recognised motorsport standards in Europe in the future.

In pursuit of better safety for competitors, these have now changed and have been improved upon, FIA8859-2015 is the latest minimum standard, and FIA 8860-2010 for the much higher standard. Although for 2019 a new F1 standard in FIA8860-2018 which also incorporated an ABP model which has built-in protection at the top of the visor opening of full-face helmets for open top racing. The latest 8860-2018 is by far the toughest homologation yet, and after its announcement almost two years ago only Stilo have a range of helmets that have passed successfully.

All helmets certified for motorsport use will carry a holographic sticker on their FIA homologation label that is normally positioned behind the inner lining of the helmet. This is tamper proof and it’s vitally important this sticker is not damaged or removed or the helmet will not be useable at sanctioned events. These numbers will be preceded by a date which signifies when they were issued, so will appear as FIA 8860-2010.

8859 is the less strict of the FIA standards and is normally the minimum standard for all competitive motorsport use sanctioned by the national governing body. It’s important to remember that 8859 is a strict and high standard, so helmets that meet this standard are perfectly adequate for use in events where the minimum is required.

8860 is effectively an international level standard. Most drivers won’t require 8860 unless driving in the WRC, Formula 1, F2, F3 or endurance events like Blancpain GT or Le Mans.

However, you absolutely can use an 8860 helmet in a national level event - if the cost price of 8860 is within your budget, it’s always advised that you go for a helmet with the greater standard as your safety is paramount at all times.

FIA 8860-2018 and the 8860-2018-ABP (Advanced Ballistic Protection) are the brand new 'benchmark' motorsport helmet standards and will be widely adopted for use in Formula 1 racing.

As with all homologations, the testing standards are too complex to go into here, but all the information is available from the FIA website if you need it.

The most notable change is the Advanced Ballistic Protection (ABP), which should become a requirement in F1 for the 2019 season which will be fed into other FIA championships year on year. ABP is a reinforcement of the shell at the forehead area and will eradicate the need for a Zylon strip. Developed using military specified ballistic, the ABP standard protects against projectiles weighing up to 225gm travelling at 250 km/h.

ABP features an energy absorption increase of 12% or 22% for larger helmets and now features the introduction of double and triple impact tests over an extended area of protection.

The FIA has also introduced a new design requirement that has been added homologation for the chin strap, this designed to aid in driver extrication.

The Snell Memorial Foundation was established in the United States in 1957 after the tragic death of Pete ‘William’ Snell. Since then, more commonly known as Snell, the foundation has been an organisation that dedicates its time exclusively to head protection through scientific and medical research, standards development, helmet testing, and public education.

SA standards are required for use in American race series’ but not really anywhere else in the motorsport world - this can be a major factor if you are going to be taking part in a race series there.

Snell homologation will appear as the date of issue after the letters ‘SA’, so the latest was is 2015 and appears as ‘Snell SA2015’. But as with FIA homologations, it’s crucial that the official sticker is retained in its original position to be valid for use in motor racing.

Snell introduced the EA standard in 2016 as a higher level than its SA application, much like the FIA 8859 vs 6660 standards.

As all international level motorsport is sanctioned by the FIA, the EA standard hasn’t really been adopted by many manufacturers, but you may find some smaller, emerging brands will conform to EA2016 in order to try and stand out against their experienced rivals in the US market.

This standard is not recognised by the FIA.

Karting helmets have their own homologations that are both issued by the Snell Memorial Foundation, namely Snell CMR2016 and Snell K2015. These standards are only for karting helmets and while they could possibly be used for uses such as track days or hill climbs, they aren’t usually allowed in other race series’. Karting homologations can ONLY be used on kart events and will not be allowed in racing or rallying.

CMR2016 is a standard dedicated solely to junior (under 16) kart racing. The standard focus’ on specific factors like weight to ensure minimal rotational mass in the event of an accident. The maximum permissible weight for a size 54/55 helmet is 1250gm and 1300gm for a 57/59.

One specific CMR2016 homologation requirements state that items attached (eg rear spoiler) over 7mm must be readily attachable and as with any helmet, homologation labels must be clear and in place. Snell CMR2016 is the latest junior helmet homologation.

K2015 is Snell’s adult karting helmet standard for adults and is roughly based on the Snell SA standard. However, unlike in racing and rallying, karting doesn’t require either HANS posts or fireproof lining. The visual aperture (opening) of a K2015 helmet can be smaller than those homologated to SA standards, but it’s unlikely manufacturers will change the shell due to development costs.

Snell K2015 is the first of the adult karting standard.

Unlike motorsport seats and harness, helmets are not dated in the same ‘5 years plus year of manufacture’ format.

While helmets don’t have specific end-dates, their relevant homologations will eventually expire. But don’t panic, it normally takes around 10-15 years for the governing bodies to expire standards. In that time, most drivers have either retired their helmet, as it becomes too tatty or the interior is, not as fresh as it once was.

This is a factor when buying a helmet and can cause issues if purchasing second hand or with old "on sale" stock, but all the new helmets we sell (unless stated) will be of the current, latest standard.

Competing in Europe the following is a guide to homologation and expiry dates (correct as of December 2018):

If you are concerned a helmet has expired, or you simply want to check valid FIA homologations, you need to refer to Technical List No 25 - Recognised Standards For Helmets.

Please note that helmets with SFI, or BSI safety standards are no longer valid for use in any UK or FIA events.