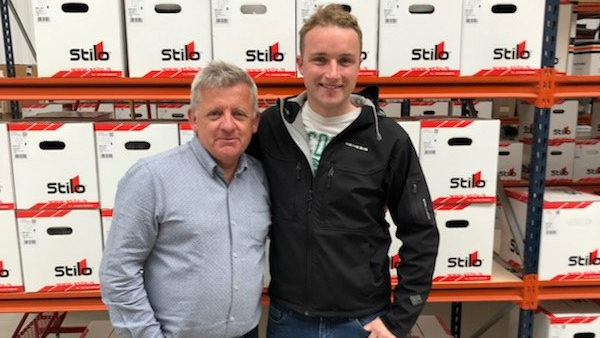 When Phil Hall became an MSA Academy member in 2015, it started an incredible relationship with Nicky Grist that continues to this day. Indeed, Nicky’s advice hasn’t just been invaluable, it’s totally transformed the way Phil now writes pace notes and it has been instrumental in his co-driving career both inside and outside a rally car.

Having now rallied around the world – and been to Everest Base Camp, although that’s another story – the 30-year old from Nottingham is now well established in the WRC, co-driving for Tom Williams in the FIA Junior World Rally Championship.

“Nicky started to help me when I was selected for the MSA Academy in 2015, because he was one of the mentors on the programme,” says Phil. “Through Nicky and the Academy, I got a position within the Toyota Development Programme, and because that was a big step up for me, Nicky started to work with me outside the Academy as well, sharing his expertise at the high level of rallying that I’d found myself thrust into. He was just invaluable and gave me fantastic advice – not just about co-driving inside the car, but things like how to deal with contracts and the business side of things.

“Nicky has helped me so much. He’s taken me out in his road car to make pace notes with me in the lanes of Wales – in fact, he completely changed the way I make pace notes, from how I write things down, to how I space things out and how I deliver the notes. His experience and advice has had a big impact on all of that – and to his day he is always at the end of the ‘phone if I need any advice. And whenever I’m in the area, I always pop into Nicky Grist Motorsports to see him, and I really appreciate the cup of tea and a chat that he always has time for.

“From his experience of contesting rough events like the Safari Rally, he told me to use a pillow to write my pace notes as it cushions everything and makes the actual process of writing notes a lot easier and neater. Of course people sometimes make fun of me as I walk around with a pillow under my arm, and I’ve been in trouble with the odd hotel when I’ve mistakenly left the pillow in the boot of the recce car, but it’s completely transformed the way I do things.

“The Toyota opportunity came out of the blue. I had a call from an unknown number – early in 2015, I had only just started at the MSA Academy and I hadn’t got Nicky’s number in my ‘phone, so I, as a very junior co-driver, didn’t know who it was. This voice said, ‘hello, it’s Nicky Grist, what do you feel about going to Finland with Toyota?’ He told me to give this guy in Finland a call, and he’d sort everything out. This guy turned out to be Jarmo Lehtinen – another phenomenal co-driver – and a few days later I was on a plane to Helsinki.

“Before I went to Finland, I popped over the Nicky’s office. He’d got some on-board footage of him and Colin [McRae] on a big television screen and he gave me the actual pace notes that he’d written for that stage and asked me to read them! He played the on-board at full Colin McRae speed, had me read the pace notes and Nicky watched how I delivered them. As a young co-driver, I couldn‘t really believe what was happening, it was a real pinch yourself moment. It was quite a challenge, because of course you couldn’t feel the car moving around, but it was an amazing experience – not least because I didn’t really know if I had the voice and the ability to read notes at what was World Rally Championship winning speed! I was pretty happy that I managed to get all the way to the end of the stage. Just!

“I use that training technique today, by taking Tom’s pace notes and reading them back when watching on-boards from the likes of Seb Ogier and other top WRC drivers on WRC Plus. You obviously don’t get the same feeling like when you’re in the car – reading pace notes from the feel of the car is something else that Nicky taught me and now I rarely look up during a stage – but it’s great practice because you have to think quicker and the rhythm and speed of delivering pace notes is so much faster. One day, I hope to be able to put all this World Rally Car practice to good use!”