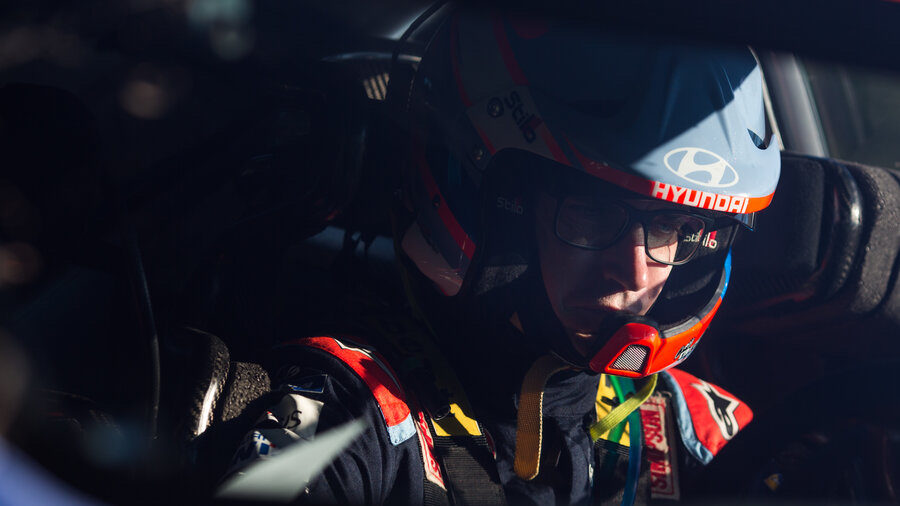 It was the Irishman’s first podium finish for the Hyundai Motorsport team and it equals his best ever World Rally Championship result, having previously finished runner-up on the 2018 Rally Sweden in a works Citroën C3 WRC.

The result jumps Breen up to eighth in the drivers’ standings, while it sees Hyundai move to within five points of Toyota in the manufacturers’ series.

However, as he and co-driver Paul Nagle share the third works i20 Coupe WRC with nine time world champions Sébastien Loeb/Daniel Elena – plus they are committed to an ERC programme – it’s as yet unclear when Breen will be next seen in the WRC.

Craig, second position, with Hyundai! It's your first podium with the team and an incredible performance this weekend. Did you imagine the result would be this good? “No, I didn't. I didn't imagine it would be so good, to be honest. But honestly, since I did the first runs in the calendar in the pre-event tests, it sort of blew me away a little bit. And I had some inkling inside that, you know, if things were in a good way and I could get into a rhythm quickly, after being in the R5 car for such a long time; if I could switch myself onto the speed, we could be here thereabout. And the whole Saturday morning, it all just seemed to kind of come together and yes, as the weekend progressed, we just got steadily more confident and more comfortable with everything. And to finish on the podium is something fantastic - and such a strong podium! There are seven world championships among all of us here, I own none of them but, it's an amazing feeling.”

How fast-paced was it and how much of a challenge was it? It looked like such of a challenge with the mix of the fast stuff, the narrow stuff, the more technical – it seemed to keep changing all the time, keeping you on your toes? “Yes, I have to say that the first passes were, generally speaking, really enjoyable and you could really push flat out. And yesterday, in particular in the morning, it was really nice. And I have to say, yes it was a little bit more tricky on the second pass. Like Ott [Tänak} said: in some places, there were some quite big surprises and the problem here with - you know, the speeds are so high in some places – you’re arriving on the corner at 180-190 kilometres per an hour. If there's something there, a rock or a hole or something that has appeared in between the two runs, you know, it can really catch you by surprise. That element is a little bit more tricky and it makes it maybe a little bit less enjoyable because you're always having to anticipate things that are already are out of your control. But still incredibly enjoyable. It's a privilege just to be able to drive these machines, they're something quite special.”

The confidence, obviously, was building stage by stage, but you came into the final day with a multiple World Champion just behind you. Were you feeling the pressure from Mr. Ogier? “He wasn't giving me pressure at all, but it was... this one that was giving me pressure [pointing to Hyundai Motorsport boss Andrea Adamo]. That was giving me more pressure. I woke up a little bit early this morning, the alarm didn't wake me up, I was awake before it, and I might have, you know, let on that the pressure wasn't getting to me. But, you know, at the end of the day, we absolutely had to deliver a result on this day and I knew it was very important both for myself and Paul going forward that we sign and seal. We couldn't just fall at the last hurdle, so there have been tough moments during the day but luckily enough, we managed to keep the rhythm high enough. And then, on the last stage, for sure, I didn't take any risks. I would have perhaps liked to manage it a little bit better, not give him so many heart attacks, but it all worked out in the end.”

When would you like to be back [in the Hyundai i20 WRC], Craig? “Tomorrow. Straightaway. Obviously me and Paul would love to be back in the car whenever we can, but we just have to wait and see. I think we've done the best that we can do this weekend. I think anything more than this result was out of our hands or unrealistic. I'm just proud and happy... and, yes, a huge thanks to the team that has worked incredibly hard during months that have been difficult for all sorts of other reasons. They worked their butts off and it absolutely paid off!”