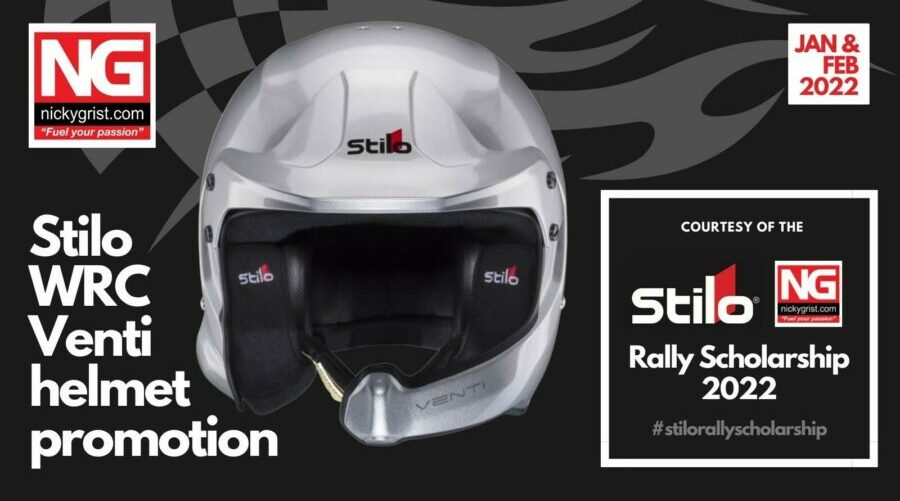 Calling all rally drivers – this is a FANTASTIC one-off promotion you won’t want to miss!

If you purchase any one of the Stilo WRC Venti range of helmets from Nicky Grist Motorsports in January and February 2022, you will go into a draw to become part of the Stilo Rally Scholarship 2022 – and receive a day’s rally driving tuition from triple British rally champion Matt Edwards and your entry paid on one major UK British rally.

The Prizes A dedicated test day and one-on-one coaching with Matt Edwards – one of the world’s top and most in-demand rally driving tutors. The reigning British rally champion will not only fine tune your driving skills, but will also help and advise you on your car’s technical set up ahead of the forthcoming season.

Your co-driver won’t miss out either. Providing he/she also uses a Stilo helmet, they will come to the test day to be coached by Nicky Grist on all aspects of co-driving.

The Test Day There will only be one dedicated test day, where all the winners will come together for a full day’s coaching on a representative gravel road in Wales.

Subject to any Welsh government Covid restrictions, the Test Day will take place in mid to late March.

Matt Edwards coaching session and the hire of the test venue will be of no cost to the winning Stilo Rally Scholarship drivers.

Accommodation will be offered to each driver and co-driver on the evening before the Test Day.

A light lunch and refreshments for drivers and co-drivers will be provided at the Test Day.

Social media coverage during the Test Day will be greatly encouraged, using the hashtags #Stilo #NickyGrist and #StiloRallyScholarship.

Terms and Conditions On the purchase of a Stilo WRC Venti helmet from Nicky Grist Motorsports in January and February 2022, the driver must email [email protected] for a Stilo Rally Scholarship prize draw application form and then email it back to NGM on completion.

Once you have received your Stilo WRC Venti helmet from Nicky Grist Motorsports, you must upload a social media post (Twitter, Facebook and Instagram – or whatever platforms you have) stating that you have made this purchase and using the hashtags #Stilo #NickyGrist and #StiloRallyScholarship.

To be eligible for the Stilo Rally Scholarship prize draw, purchase of the Stilo WRC Venti helmet from Nicky Grist Motorsports cannot be made in conjunction with any other promotion or discount.

The co-driver of each winning driver will be invited to the Test Day to have a coaching session with Nicky Grist, providing they are Stilo helmet users. Co-drivers do not have to purchase a new Stilo WRC Venti helmet in January and February to qualify for this reward. A driver can only bring one co-driver.

Drivers must state what championship – BRC, BTRDA, Welsh or Scottish – they intend to contest in 2022 and wherever possible put their respective championship registration number on the application form.

The prize is available for all drivers registered in the listed championships, irrelevant of their car or class.

Advertising space on your rally car will be given over to advertise Stilo and Nicky Grist Motorsports during the Test Day and the 2022 season, in a position agreed individually.

There will be no alternative prize or refund of any kind if a winning driver (or co-driver) cannot attend the Test Day and no alternative date for the test can be arranged.

Drivers must cover their own travel and vehicle (prep, fuel, tyres, etc) costs and any other expenses incurred for the Test Day.

Accommodation at the Test Day will be one twin room (for driver and co-driver) and for one night only.

If a winning driver enters and then withdraws from the Nicky Grist Stages, there will be no alternative prize or refund of any kind. The entry fee will be repaid to Nicky Grist Motorsports, not the driver.

Winning drivers from the BRC, BTRDA, Welsh and Scottish championships will be selected at random by Nicky Grist. Winning drivers will be notified on or shortly after Tuesday 1 March 2022.