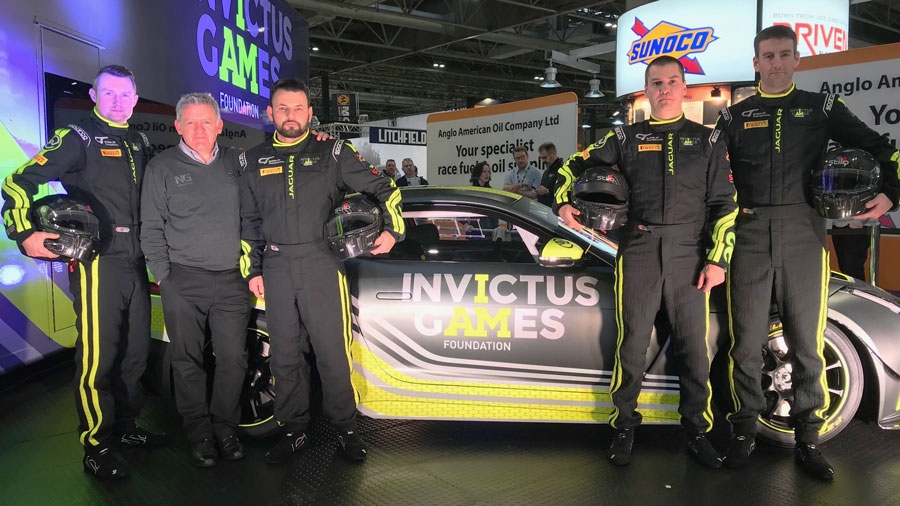 The all-new team, which was unveiled at the Autosport Show in Birmingham, is a collaboration between the Invictus Games Foundation and Superdry co-founder James Holder, who commissioned Jaguar’s Special Vehicle Operations (SVO) division to develop and build two bespoke F-TYPE SVR GT4s, which will race in this year’s British GT Championship.

The F-TYPE SVR GT4 has been designed with its military veteran drivers in mind and is based on Jaguar’s fastest current road car (capable of 200mph in production trim) with its signature 5-litre supercharged V8 engine.

Invictus Games Racing, together with Mission Motorsport, have selected and trained four new racing drivers from the Armed Forces that it feels are best suited and most likely to gain personally from the programme. They will be joined by Pro drivers Matthew George (who has previously raced in British GT) and Jason Wolfe (a former two-time Pirelli World Challenge TCA champion) who will mentor and share the pair of F-TYPE SVR GT4s in the British GT Pro-Am classification. The four Armed Forces drivers are:

In 2011, 14 years after first joining the Royal Marines, Major Steve McCulley was nearly killed by an Improvised Explosive Device (IED) while leading 175 Royal Marines in Helmand Province, Afghanistan. Miraculously, he survived. However, the resultant injuries were so serious that he lay in a coma for three weeks. A gruelling two-year physical rehabilitation programme followed, but his military career was over. Steve, who lives in Portsmouth, was helped through his rehabilitation by his long-held love of motorsport.

By 2011 Royal Marines Commando Paul Vice MC was on his fourth tour of Afghanistan. On foot patrol in Helmand Province, he stepped on a command wire Improvised Explosive Device (IED) which detonated underneath his Section. He suffered a traumatic brain injury resulting in paralysis of his right arm. More than 400 pieces of shrapnel were removed from his body by surgeons before a below-knee amputation followed. Undeterred, Paul, who now lives in Exeter, went on to become the most successful male athlete at the 2016 Invictus Games winning seven medals, including two Golds.

South African-born Basil Rawlinson joined the 2nd Battalion Parachute Regiment in 2009, before serving on an operational tour of Afghanistan between 2010 and 2011. A Post-Traumatic Stress Disorder (PTSD) and several degenerative discs in his back saw him placed on medical leave before being fully discharged in August 2014. He now lives in Leamington Spa, having secured an engineering role at Jaguar Land Rover.

Ben Norfolk, who lives in Hampshire, served on several operational tours to Iraq and Afghanistan as a Royal Air Force Sergeant. In 2008, he assisted with a multiple casualty recovery at Camp Bastion. The desperate scenes that Ben witnessed that day reshaped his life. The events culminated in complex post-traumatic stress disorder (C-PTSD), anxiety and depression. He was medically discharged from the RAF in November 2017.

“We’re very proud to be supplying the Invictus Games Racing team’s driver line-up with Stilo helmets,” said Nicky. “We are indebted to the sacrifices members of the Armed Forces make in the most dangerous parts of the world, and the Invictus Games in particularly is a truly inspirational event for both the wounded and injured soldiers who take part and for everyone who watches it in awe and admiration. It’s wonderful that the Invictus Games has branched out into motorsport, and I wish them all the very best for a successful British GT Championship campaign.”